One bag – one tree

Looking for a starting point of how we could concretely be active in creating and keeping up a world worthy of living in, we came across the student initiative “Plant-for-the-Planet”

As a part of a school presentation about the climate crisis, Felix Finkbeiner who was 9-years-old then came upon the reforestation campaign “Green Belt Movement” of the Kenyan Nobel Peace Prize winner Wangari Maathai. She achieved that 30 million trees were planted within 30 years. At the end of his presentation, Felix presented the vision that children could plant one million trees in every country of the world.

„While others discuss, we plant trees” – With this slogan, children worldwide from over 90 countries organize themselves. In some academies, they teach about the climate crisis, distributive justice and world citizenship and train other children to become ambassadors for climate justice. But since talking alone does not stop the glaciers from melting, they show how everyone is able to actively take over responsibility and actively form the future by organizing tree-planting-parties.

One tree absorbs approx. 10 kg of CO2 per year and approx. 3 tons of CO2 during its lifetime. At the same time, every tree stands as a symbol for climate justice.

„For many adults, future means 20, 30 years, but for us children 2100 will be during our life time. For some elder people it is just an academic question, whether the sea level rises 1, 2 or 3 meters. For us children, it is a question of survival.” (Max, 12 years)

The children announced the goal of planting 1.000 billion trees in the entire world and together they have taken over responsibility since 2007. Every tree, which has been planted by them, helps the “Billion Tree Campaign” of the UNEP, which was founded in 2007 by Wangari Maathai and Prince Albert from Monaco. A total of 12 billion tree have been planted worldwide since then.

Our contribution
For every bag purchased from our own brand ‘Jahn-Tasche’ and ‘Hamosons’ with the value of more than 40 Euros, we will donate the amount which planting a tree costs. This is 1,00 Euro at the moment.

You can follow the tree donations based on the donation certificates here:

For the time period: 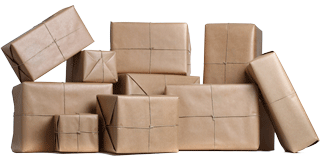 For deliveries to non-EU countries are subject to additional duties, taxes and fees. Further informationen you will get on your local customs authorities.